“However difficult life may seem, there is always something you can do and succeed at.” Stephen Hawking’s speech leaves audience in tears

Professor Stephen Hawking moved an audience to tears on Sunday when he spoke at an event at Cambridge University to mark his 75th birthday.

The theoretical physicist and cosmologist turned 75 in January but an event to mark the diamond jubilee was held on Sunday. 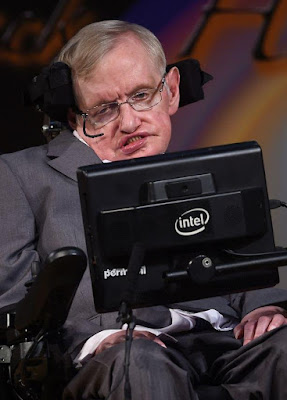 At the event, he gave a talk reflecting on his life and scientific work.  Hawkings is renowned for his contributions to the fields of cosmology, general relativity and quantum gravity, especially in the context of black holes. and he has even had a film made about him. The film is titled The Theory of Everything.

Prof Hawkings was able to achieve so much in spite of the medical problems he has faced since he was a young child. In his talk, titled My Life In Physics, he spoke about his early realisation of his medical problems when he went skating with his mother, according to Cambridge News.

“I fell over and had great difficulty getting up,” he said.

Prof Hawking was later diagnosed with amyotrophic lateral sclerosis (ALS), at the age of 21.

“At first I became depressed,” he said. “I seemed to be getting worse really rapidly. There didn’t seem any point working on my PhD because I didn’t know I would live long enough to finish it. But then the condition developed more slowly and I began to make progress in my work. After my expectations had been reduced to zero, every new day became a bonus and I began to appreciate everything I did have. While there’s life there’s hope.”

He spoke about his world-shattering achievements in physics and beyond with a humbling modesty, then finished on a very human note.

He said: “Our picture of the universe has changed a lot in the last 50 years and I am happy if I have made a small contribution. Remember to look up at the stars and not down at your feet. Be curious and however difficult life may seem, there is always something you can do and succeed at.”

His speech followed an afternoon of lectures about gravity and black holes from other distinguished scientists, including Professor Brian Cox. The event concluded with the full auditorium singing Happy Birthday to Prof Hawking.